Cherry Cheeks was a very good child. He was round, with big red Cheeks.

That’s why he was called Cherry Cheeks.

He lived in a little house up the mountainside, just beside a big fir forest.

Cherry Cheeks would often go off for a walk. He would put his red hat – the one with the pompom – and went to visit his friends in the mountains.

Sometimes, as he was walking along, a ladybird would come and land on his finger.

Cherry Cheeks wouldn’t move. Instead, he sang: "Ladybird, what a wonderful word!"

Then the ladybird would fly off, feeling very pleased and thinking how nice Cherry Cheeks was. 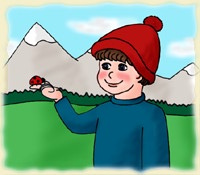